RJD supremo Lalu Prasad Yadav, recently campaigned in the bypolls at Tarapur and Kusheshwarsthan assembly seats and sought votes for RJD candidates. Lalu, who recently came back into Bihar politics after conviction in jail sentence, is the first Member of Parliament to be disqualified on October 13, 2013. He was first convicted for five years and now he can’t contest an election (except his party) for 11 years.

The election was marred with tension as some ballot boxes were found thrown on the field when electricity was switched off and CRPF was summoned.

As PUSU president (elected in alliance between Samajwadi Yuvraj Sabha and Vidyarthi Parishad), Lalu was member of government committees of Patna district and had successfully persuaded the administration to have special counters for students in all cinema halls. PUSU president was entitled with telephones in the office and residence and hostel room. 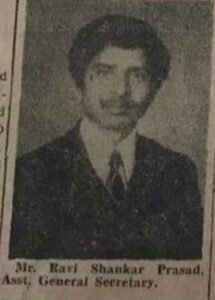 Lalu’s plunge into active politics took during the hosting of convention of leaders of students unions from different universities in the country at Senate Hall where Kuldip Nayar was the chief guest. He later went on to become the Chief Minister of Bihar and Union Minister. Later on 18 February 1974, the Patna University Students Union had organized a convention which invited student leaders from the whole state. Lalu was leading the student body, that gherao the assembly on the opening day of budget session. Rest is the history as the protest turned into large scale arson, violence, destruction of both government and private properties. Jayprakash Narayan was handed over the leadership and emergency was declared in the country.

At the age of 29, Lalu defeated sitting member- Ramshekhar Singh of Congress from Chapra Lok Sabha constituency. The scribe was present during Lalu’s election campaign in Mahendru Ghat when he was going to file his nomination papers.

He was given certificate by returning officer and returned by steamer from Pahleza Ghat on March 23,1977. During that time, the daily rate for hiring Ambassador car as taxi was Rs 60.

Lalu used to campaign in his constituency till 3 am, he obliged all hosts and accepted their food even late during the night. There used to be no cooler or AC then and Lalu used to sleep on ‘chauki’ in the open, and took bath on the side of the well or handpumps.

When elected as the member of Lok Sabha, Lalu had gone to New Delhi by the Sonbhadra Express, which used to be a popular train during that time, in sleeper class. Later he used to travel MR special saloons in 2004.

Prabhat Jamaiyar, his cabinet member in Union presented him a box with eatables for train journey. Lalu became the Union Railway Minister 27 years later and introduced Garib Rath and earned laurels from IIM, Oxford too. Abdul Qaiyum Ansari, who fought not only for independence but also against the social and economic inequalities Nandini Satpathy: An Eight Year Old Girl Who Took Off the British Flag