The Purana Qila (Purana-Qal’a) occupies the ancient mound which conceals the ruins of the city of Indraprastha of Mahabharata story. Sher shah sur (1538-45) demolished the city of Dinpanah built by Humayun and on the same site raised this citadel.

It is irregularly oblong on plan, with bastions on the corners and in the western wall. Its ramparts cover a perimeter of nearly 2km.

It has three main fates on the north, south and west, the last one functioning as the entrance now. The gates are doubled-storeyed, built with red sandstone and surmounted by Chhatirs.

On the inside, against the enclosure wall run cells in two-bay depth. Among the three gates, the northern one is called the Talaqi-Darwaza (forbidden gate).

Why and when the entrance through it was forbidden is not known. Above the oriel windows on its front area are craved marble leogryphs engaged in combat with a man.

The exterior of the gate was originally decorated with coloured tiles, and the rooms with incised plaster-work. It is believed that Sher Shah left the Purana- Qila unfinished, and it was completed by Humayun.

Among the scribblings in ink that existed in a recess of the gate, there was a mention of Humayun, and it is possible , therefore, that if the gate was not constructed by Humayun, it was at least repaired by him.

In the southern gate, which is called the Humanyun-Darwaza, there existed a similar inscription in ink mentioning Sher Shah and the date (1543-44).

Purana-Qila originally lay on the bank of the Yamuna. The general depression on the northern and western sides of the fortress suggests that a wide moat connected with the river existed on these sides, which were approached through a causeway connecting the fortress with the main land.

In 1955, in some trail trenches sunk in the southeastern portion of the Purana Qila , pieces of the Painted Grey Ware turned up, apart from relics and remains of later periods.

Since this characteristics ware has been noticed earlier at several sites associated with the story of the Mahabharata and had been dated to around 1000 B.C.., its occurence here seemed to support the tradition of Purana-Qila being the site of Indraprastha, the capital of the Pandavas, heroes of the Mahabharata.

Excavations were resumed here in 1969 along the flanks of the passage leading to the Water Gate in the eastern wall and continued till 1973. A settlement of the Painted Grey Ware people has not been located, but a continuous stratification from the Mauryan to Early Mughal period has certainly emerged.

Pieces of the Painted Grey Ware occur, however, sporadicallu, but among later deposits. Evidence of the Mauryan period (c.300B.C.) is provided by the existence of the Northern Black Polished Ware, a fine hard earthen pottery with a glossy surface, punch-marked coins, humans and animal terracota figurines and inscribed terracota seals.

Soak- wells lined with terracotta rings and burnt bricks have also been found , although most of the dwellings were made of mud bricks or wattle and daub, sometimes reinforced with wooden posts.

The Northern Black Polished Ware continued during the Sunga period( 200-100 B. C.) Along with plain red pottery. The houses were largely built of local rubble or of mud brick over rubble foundations.

Tamped earth or mud bricks made up the floors. The characteristic art of this period, reflecting the religious beliefs of people, is represented by small terracota plaques modelling semi-divine being. Uninscribed cast coins of the Mathura kings and terracota sealings also occur in the levels.

Stamped decoration marks the red earthenware of the next Saka-Khushan period(c.100B.C. -A.D. 300). Firm evidence of the chronology of this period is provided by the copper currency of the Khushans. The increasing use of burnt btick appears now to lend an urban look to the settlement.

Towards the end of the Rajput period (c, 900-1200) a massive rubble wall was raised to enclose perhaps part of the town, although the houses continued to be built with rubble brickbats and mud bricks. There was little change in pottery. coins of ‘bull and horseman’ type,have also been recovered from these levels.

During the succeeding Sultanate rule (1206-1526), rubble and brickbats were used for ordinary houses. But it witnessed the introduction of glazed ware , both of Central Asian affinities and local manufacture. Coins of Balban(1266-1286) and Muhammad bin Tughlaq(1325-51) have turned up in these levels.

Typical and fascinating objects of the Early Mughal period(1526-1556), representing the rule of Babur, Surs and Humayun, came from a refuse dump of discarded broken household objects. These included jars of eggahell- thin grey ware, glazed ware dishes and painted Chinese porcelain, a piece of which bears the Chinese inscription, made in the great Ming Dynasty (1465-87).

On another piece is inscribed a fairy tale in Chinese verse. Other interesting objects comprised glass wine bottles, a gold ear-ring inlaid with emerald and pearls and a coin of Adil Shah Suri(1552-53). 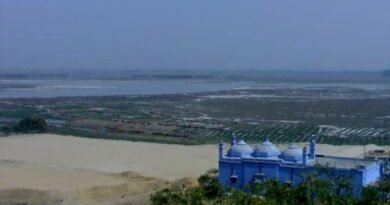