India has been a land of kingdoms, kings and it’s grandeur empire stretching over vast areas. Among them are the famous Delhi sultanate , the Mughals and the Rajput dynasties of the north india .

Let’s turn our focus towards the equally powerful and well established empire of the Deccan plateau southern part of India – ” The Vijaynagar Empire “. 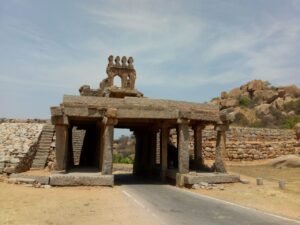 Meaning the land of victory.

Recently I was fortunate to visit this famous UNESCO World Heritage site and got to observe some of the minute details of this empire . A well fortified city and water tank system for its people to avail best of its facilities provided by their master .

This empire is vastly divided into two major groups
A. The Sacred centres
B. The Royal Centres.

Let’s have a glimpse of each of these in detail.

A. The Sacred Centre
This part of the empire was specially dedicated to the religious rituals and various temples such as the Vitthala temple , within the courtyard along with the various other temples and mandaps probably used by the king and his family for special occasions. 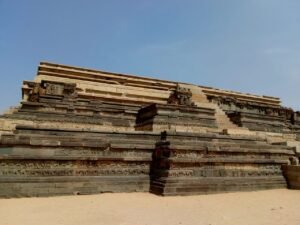 The Stone Chariot is another eye-catching symbolic of the prestige and power found within the premises.

The various other temples like the virupaksh temple famous for its huge gopuram is also the part of the sacred centre.

B. The Royal Centres.
This part with its name is clear was the kings own residential and most confidential area , where king along with his family use to live . It comprises of various other monuments such as the Mahanavmi Dibba which was a huge platform used probably during the 9 days festival season . From where the king along with his family and royal guest would see the march pass of his military men , various cultural dances and enjoy the ceremony . There is a believe that this Mahanavmi Dibba was constructed after the victory over the Gajapati rulers of Orissa . Vijaynagar was not an isolated empire , they has trade relations , diplomatic relations and has strong connections with the outer world mainly by the European and various others who has visited as a royal guest such as Abdul Razzaq was the first foreigner from present day Iran to visit the kingdom and has written in his travelogue about the generousity of the king and various rituals and other happening of the kings courts . Among the various others were Domingo Paes , Nicolas Conti who had visited the Vijayanagar and had shared there experience in there accounts. 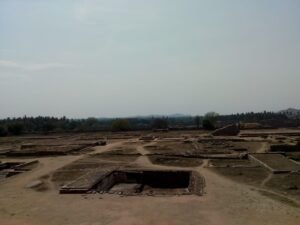 Moving towards the royal centre there are other places such as queen’s Bath , Hazaramma temple which is surrounded by garden area which was exclusive of the Mughal style Architecture.
The Lotus Mahal is another significant structure located in the royal centre

The Vijaynagar Empire was strong with its military and cavalry they had elephant stables made where the elephants were kept which were under the guidance of king himself . These are some of the major parts of the royal and sacred centres of the empire , unfortunately the king’s palace is in ruin state but the left over parts stand still as the proof of the richest and powerful empire and the left behind legacy of the empire .
With my personal observation I could say that people of this empire were well aware of their land as well as the outer world , they were discipline and extremely religious. One can only experience it when he /she could visit the site and could feel the richness and royalty . Babri Mosque Demolition : How The Guardian reported the event in December 1992