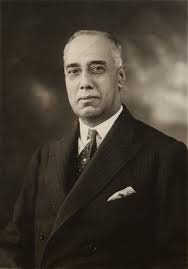 On 27th December, 1894, at the Mohammedan Educational Conference, a twenty-five year old lawyer who had returned from England composed and recited a eulogy of Sir Syed Ahmad Khan in English. Excerpts of the eulogy are;

“The sacred Brick of this grand Hall,

The boarding house, the College Rooms,

And this great conference, each and all

Priceless and Loved, Shall Waft, your name

Sir Syed through the coming days,

Immortal lo, shall be your frame

Never waning, but in numerous ways,

Be ever more, the joy of all!”

The twenty-five-year old lawyer was Mian Muhammad Shafi, born on 10th March, 1869 in famous “Mian family” of Arain tribe at Baghbanpura near Lahore. Many of his illustrious ancestors were conferred with titles and acknowledgments from the time of the Aurangzeb up to the rule of Maharaja Ranjit Singh in Punjab. He started education from a vernacular middle school only to later study at Lahore University. In August, 1889, Shafi was sent to England to study law. He secured an admission at the honorable Society of the Middle temple where his cousin Mian Shah Din was already studying from the last two years. In 1890, he was elected as the President of Anjuman-i- Islamia, London and in the same year, he competed for a scholarship in international and Constitutional Law and Constitutional History at the prestigious Middle Temple.

In England, he actively participated at every forum which addressed the welfare of the Indian students, such as Indian section of the Royal Society of Arts, National Indian Association, and the society of encouragement and protection of Indian Arts. He held the membership of Paddington Parliament, an esteemed political society that constituted Members of Parliament, Barristers, Solicitors, and Merchants. In 1892, he left England and started his legal career at Hoshiarpur. Though he was enrolled at both Allahabad and Lahore High Courts.

The participation of the Mian Muhammad Shafi in Aligarh movement can be traced from the time of the formation of Anglo-Muhammadan Defence Association of Upper India in 1892. He represented Punjab province as a member of the association along with Syed Mahmood and Theodore Beck (the then Principal of Aligarh College) as the joint secretaries. After his return from England in 1892, he participated in all annual meetings of All India Muhammadan Educational Conference. Several times, he presided over the female education and other sections of the conference. In 1898, the same year when Sir Syed Ahmed Khan departed from this world, he took up a bigger responsibility of Mohammedan Anglo-Oriental College. This was the appointment of Mian Muhammad Shafi as a trustee of Aligarh College. At that time, the College had already established its reputation as one of the best residential institutions in India.

In the following years, he was engaged in political and legal career along with an active participation in Aligarh movement. After the death of Sir Syed the regulatory body of the College got afflicted with factional politics due to a rift between Aftab Ahmad Khan and Ali brothers. Mian Muhammad Shafi distanced himself from these controversies. By 1910, the efforts for the University campaign were revived. All India Muslim University association was formed under the leadership of His Highness, Agha Khan and Nawab Viqarul-Mulk to centralize the efforts required for the elevation of the College to University in 1910. Mian Muhammad Shafi was elected as the Vice-president of All India Muslim University Association, and Honorary general secretary of the Punjab Province. For the next two years, Mian Muhammad Shafi put all his efforts for the cause and raised a fund of more three hundred thousand Rupees for the upliftment of the College to University. He himself donated five thousand Rupees in 1912 for the mission.

The British Government rewarded Mian Muhammad Shafi with C.I.E in 1916  and conferred Knighthood on him in 1925. During his tenure as an education member of the Viceroy Executive Council, the Decca, Nagpur, Rangoon, Lucknow, Aligarh and Delhi Universities were established. The bill of Aligarh Muslim University that had been  lingering in backwaters for more than a decade was finalized by his efforts. Government sanctioned the reforms for Allahabad and Madras Universities in his tenure. For his remarkable efforts, the Aligarh Muslim University conferred a D.Lit. (Honoris Causa) on 28th December, 1922 on the eve of its first Convocation. Delhi University conferred him with Doctor of Law and Viceroy gave him honorary nomination as Pro-Chancellor of the University in the same year. He was also responsible for Indianization of the education department. The number Indian officers rose from twenty-nine to one hundred twenty during his tenure.The man took a farewell banquet from the Viceroy Executive Council on 24th September, 1925 and died in Lahore on 7th January, 1932.

(Author is a medico, who teaches anatomy as profession and writes about history, culture and food as passion)