India was under colonial master, when the first world war broke out. Lord Willingdon was governor of Bombay. He encouraged Indians to participate in the war and serve the British Empire. Jinnah, a prominent figure of Bombay, a successful lawyer asked equal treatment for Indians serving the British army. He said to Lord Willingdon; “If you wish to enable us to help you, to facilitate and stimulate the recruiting, you must make educated people feel that they are citizens of the Empire and the King’s equal subject.” The war ended with the victory of allied.

The Jinnah's People's Memorial Hall, is located inside the compound of the Indian National Congress Buildings near Lamington Road and nowadays is known as P.J. Hall (maybe to hide its origins).#Jinnah #MAJinnah #MuhammadAliJinnah #Bombay#Congress #INC https://t.co/5mC50WaH22

December 1918, Lord Willingdon was leaving office. In memory of the great war it was proposed to erect a statue of Lord Willingdon, which Jinnah opposed. There was a meeting in the town Hall Bombay for the proposal to proceed. Jinnah a young Indian leader led the protest with his young beautiful wife who was encouraging the protesters to enter the town hall in support of her husband. Police was called, Jinnah; a man who always called for maintaining ‘order’ and ‘discipline’ was assaulted and thrown out of the town hall. The ‘cold logician’ was cold no longer: with his wife besides him, he led a noisy crowd to Apollo Street. He stood up above the crowd and said: Gentlemen, you are the citizens of Bombay. You have today scored a great victory for democracy. Your triumph has made it clear that even the combined forces of bureaucracy and autocracy could not overawe you. December the 11th is a Red letter Day in the history of Bombay. Gentlemen, go and rejoice over the day that has secured us the triumph of democracy.”

This protest made Jinnah a star politician. His supporters, collected money to build a hall in Jinnah’s memory. Between 30,000-60,000 Rs. was collected and a memorial was built in the name of Jinnah ‘Jinnah’s people’s Memorial Hall’ at Leamington Road. On the wall is a marble plaque recalling the ‘historic triumph’ of the Citizen’s of Bombay, ‘under the brave and brilliant leadership of Mohamed Ali Jinnah.’

One of the best son of the soil, Mohammad Ali Jinnah who began his political career promoting Hindu-Muslim unity is now one of the most misunderstood leaders of the subcontinent. The Muslim Martyrs of Royal Indian Naval Mutiny of 1946 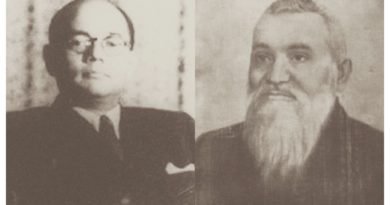