The Indian subcontinent was one of the largest and the most populous territory ever colonised by the British Empire and it was among the first few countries to break free from the Western rule. Not only they had an influence on our rich Indian culture but had a deep rooted impact on the traditional Indian medicine system.

Earlier during the 18the century there was a social interaction between the western and the indigenous system of medicine. However the discovery of the human circulatory system by the English physician, William Harvey, for the first time led to a situation where the British started to look down upon the traditional Indian medicine. This scientific breakthrough had influenced the medical system, institutions and practitioners in India. In fact many historians argue that the colonial regime used Western medicine as a tool to expand and authorize its rule in India. So let us delve and have a closer look what two centuries of the British rule in India did to the Unani and Ayurveda.

India had physicians of diverse backgrounds. They were the Vaidyas and Hakims who practiced Ayurveda and Unani medicine respectively. The Ayurveda system emerged in India around 600BC while the Unani Tibb was introduces in India during the 12th century with the establishment of Muslim power in India. Both vaidyas and hakims lived in harmony with each other. They exchanged ideas and helped one another in practicing their respective skills.

During the early phase, around mid-18th century, the practice of Western medicine, known as ‘doctory’ in India, gained momentum in the colonial India. The doctor’s attire, appearance and the way they communicated was very much different from the traditional practitioners. They were supported by the British and some Indians educated in the Western countries. During this era the Vaidyas and Hakims suffered significantly due to their loss of prestige against the Western medicine’s claims of being superior. This was partly due to the on-going discoveries, innovations and research in human anatomy, physiology, pathology which was lacking in the traditional medicine back then as they mainly relied on the symptomatic treatment.

Initially the European doctors respected the Indian system of medicine and were willing to learn their practices of treating tropical illnesses. Later the devising of microscope which was one of the major innovations as it aided the Western scientists to study the disease causing pathogens. Antonie van Leeuwenhoek used single-lens microscope to make the first observation of Bacteria and protozoa. Furthermore the invention of stethoscope by an Irish physician, Arthur Leared in 1851 and in 1852 George Philip Cammann perfected the design of the stethoscope was a massive advancement in the field of medicine. Therefore they claimed themselves to have more ‘superior’ system of medicine due to the presence of scientific evidences rather than wisdom.

There have been developments of many different medical education, services and institutions during this period in India. During the later 18th century when the British East India Company was established in Bengal, many British surgeons were recruited. These surgeons had to pass competitive exams both in Britain and in India. Bengal Medical Services was instituted for formalizing the employment of British surgeons in Bengal.

Majority of the surgeons worked for the military services owing to the warfare during the 18th century. The Indian soldiers who were recruited by the British East India Company were the first Indians to receive the medical treatment by the British doctors. Among them few of the higher cast soldiers denied the western medication. So the company later hired Indian practitioners for dispensing medicines. Soon the Company began hiring Indians as medical assistants. Therefore after 1760 “Subordinate Medical Services” (SMS) was formulated in each presidency for organising both the western and Indian medical practitioners to practice their skills in a state of harmony with one another.

Soon the Indian educationist began translating the classical Ayurvedic and Unani texts which astonished the Europeans with the accomplishments that the Indian medicine had achieved during the early times. This made them critical of the present day Indian medicine. Sir William Jones in 1789 founded a journal ‘Journal of Asiatic Research’. He supported the research of the Indian medicine and the medicinal plants.

In 1792 the first hospital was set up in Calcutta that was opened up for the general Indian public. The people reported for the treatment of critical illnesses and gradually the wealthy and the noble Indian men requested to get treated by the doctor as they refused to go the traditional practitioners.
The hakims and Vaidyas continued to remain popular among majority of the Indian masses. The popular hakims were Sharif’s in Delhi and Aziz’s in Lucknow. They had their own clinics with lucrative practices. There were no separate centres for their training. They trained their family members with the knowledge and the skills gained during their practice.

In the year 1822 and 1824, Native Medical Institute (NMI) and Sanskrit college were set up in Calcutta to teach both the western and Indian system of medicine in Urdu and Sanskrit respectively. The period after 1820 witnessed the rapid medical advancements in the field of obstetrics, amputation surgery and management of fracture especially after the introduction of chloroform in India in 1849. This led to the distancing of the western and Indian system of medicine. Modern instruments such as thermometers, stethoscope, microscope and vaccine led to the improvement in the diagnosis and prevention of the disease. These advancements shook the foundation of orientalism and the Europeans no longer saw benefits in rediscovering the traditional medicine as they no longer considered it rational.

Another criticism against Indian medical system was its lack in hands-on clinical training in contrast to the western medicine which emphasised practical learning in hospitals and clinics. 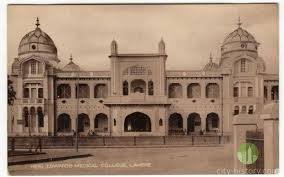 Later the British East India Company started training its personnel in western medicine and completely stopped its support towards the Indian system of medicine. The colleges that were established in 1822 and 1824 (as mentioned previously) were abolished and in 1835 Calcutta medical college was established that delivered only the western system of medicine in English. Medical colleges were also opened in Madras, Bombay and Lahore. These colleges were recognised by the Royal college of Surgery and includes subjects like human anatomy, human dissection among many other. The course length was increased to five years. Indian medical services (IMS) was formed in 1897. The period from 1860 to 1880 witnessed the formulation of medical schools for training the para-medical staffs who were later known as ‘licentiates’. In many provincial institutions the western medicine were delivered in local languages. Therefore, the western medical education was at the reach of Indians. This gave them the recognised status of being a doctor and a chance of being into the Company’s medical service. The western-educated Indians supported the western medicine and considered it as a superior form of knowledge.

The western medicine became widely popular among the Indian females. Anandibai Gopal Joshi was the first women from erstwhile Bombay presidency of India to graduate with a degree in western medicine in United States in March 1886. Rupabai Furdoonji is known for being the first female anaesthetist in the world.

The British tried to prove their supremacy in every field including medicine to justify their rule over the Indian sub-continent and I strongly believe that the Western medicine have helped in the establishment of colonial power and dominion in India.