Founded by SHAIKH ISSA KHAN Afghan – who had 4 sons.

The eldest son SHAIKH RUKHNU-DIN KHAN AFGHAN was titled SHER KHAN by Mughal Emperor JAHANGIR when he was a prince, as he served in the army & lost his arm in battle against UMR SINGH I, the Rana of Udaipur.

He established the first village in Bara Basti known as Basi Bangar which is on the shores of Ganga. But after his death, the emperor bestowed some portion of his rank and jagir to his brother, Shaikh Allu Khan Afghan during the reign of Emperor jehangir /Shah Jahan and he moved from Basi Bangar to Nasirabad Ghuntu, Bulandshahr district Uttar Pradesh. He changed its name from NASIRABAD to KHANPUR and fought many battles under the service of Mughal Emperor Shahjahan. The battle that came in the light of history is against Raja Jagat Singh Pathania of Taragarh, Himachal Pradesh. He rebelled against Mughal Shajahan in which he fortified the forts of Nurpur, Mau, Taragarh of Himachal Pradesh and during this battled SHAIKH ALLU KHAN AFGHAN was perishey and only his head was came back to KHANPUR. 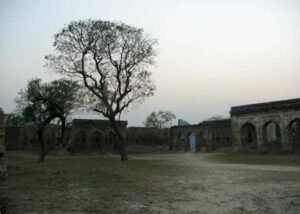 SHAIKH ALLU KHAN AFGHAN built the big fort at erstwhile Khanpur estate which had several majestic gates, a court, Mosque that is built with big blocks and lakhauri bricks (Lahori) of mud.

Khanpur estate was the main headquarters of Bara Basti Pathans.

The Erstwhile Khanpur estate had around many hundred villages, landholding shares & parganas in Meerut , Budaun, Moradabad, Bulandshahr. It was a major Taluqdari estate. 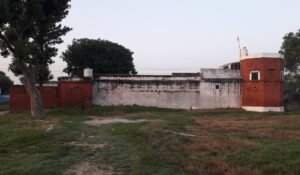 The Khanpur family had an inherited feud with the Kuchesar family and fought many battles with them for landholding /parganas.

Historical event – Nawab Mustafa Khan (pen name -Shefta) of Jahangirabad, contemporary of Mirza Ghalib with close ties to Emperor Bahadur Shah Zafar, was expelled out from Jahangirabad fort by Thakur Bheem Singh of Guraoli, bulandshahar. The nawab then went to the Khanpur family asking for help.Munir Khan, the sole son of S/o Azaam Khan went on elephant with many irregular cavalry troops mostly recruited from the Pathans of Barabasti. Thakur Bheem Singh was defeated and Munir Khan put him behind his elephant to khanpur fort with a promise to never trouble the Nawab again.

1-Munir khan-who took a very prominent role during the first war for independence 1857 fought many battle and got fatally wounded and was martyred on the battlefield.

Azaam khan- He also took very prominent role during the first war for independence 1857 and was given charge of district by nawab of malagarh but subsequently caught by a jat police officer by name Khushi ram later on put tried unrer military commission and many charges was framed against him like wagering war against the amnesty and hanged till death.

Abdul latif khan- He fought in a very different manner.He never came on the battle ground beside he refused to britishers the sum of money give shelter to revolutionaries who were coming from near by places,wrote letters to the emperor about to help in every manner he could in that area. Britishers captured him and later on deported to andaman and nicobar. And later on also khanpur family also participated in freedom struggle movement when ever the time come my grandfather late janab SAEED ur REHMAN KHAN sahab joined the allama mashriqi movement of “khaakh saar fauj tehreekh “in which very nobles person took part in it.

But subsequently was captured with many ammunition and weapons at basi when army and police surrounded the house during the late 40’s and was sent to bulandshehar jail for 2 or more years under safety act.