Raj Narain Mishra (Rajnarayan Mishra, or Misra), an Indian freedom fighter whose elder brother Baburam Mishra was sentenced for 38 years for fighting against the British, led raids on the British establishments with his group during the Quit India Movement, 1942. A resident of Lakhimpur Kheri, U.P he was charged with revolutionary raids in Unnao and was sentenced to death.

Raj Narain Mishra attained martyrdom on December 9, 1944 when the British hanged him till death in Lucknow Central Jail. Before his hanging, Mishra wrote a letter to his brother Lalan Mishra, who was also in Fatehgarh jail for fighting the British.

According to your desire I sent a message to Sagdarpur for telling beads, but so far my letter has not been acknowledged. To tell you the real truth I have no faith in prayers.

The reformists and middle class Congressmen cannot take advantage of my sacrifice, because I stand for a classless society.

I want to have socialism leading to a classless society. I want the liquidation of the middle class reformists. A few reformists of the bourgeoisie should not be allowed to benefit by it. I am dying for the poor. We should put an end to class distinctions. A socialist and a classless society is our objective. Although Kunwar Khushakhat Rai is defending me and he belongs to the higher class, I have not minced matters and have told him of the cause which is dearest to me. It is good that he has not spent a single penny from his pocket, but has taken all money for my defence from the poor peasants. You constitute my family, it is you who should benefit. You should expand the family and explain to the people why I am dying. Please make use of my sacrifice properly, expand the work for which I am being hanged, I have also written to Bharat. My greetings to all my family comrades.

“Please leave no stone unturned to wipe away the capitalists, even if they are in the Congress. Along with foreign capitalists they are sucking our blood.”

As Mishra was taken to the gallows he told the people:

“I am dying for the country. I shall be reborn and shall die again.”

He went to the gallows with the slogan “Inquilab Zindabad” on his lips.

Raj Narain Mishra attained martyrdom on 9th December 1944 in Lucknow district Jail but few people know about this great son of the soil.

Nawab of Kurnool Ghulam Rasool Khan A Great Freedom Fighter of India who fought against the British Empire. 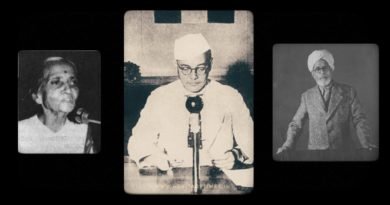 One thought on “Raj Narain Mishra : A Forgotten Hero Who Wanted A Classless Society In India”