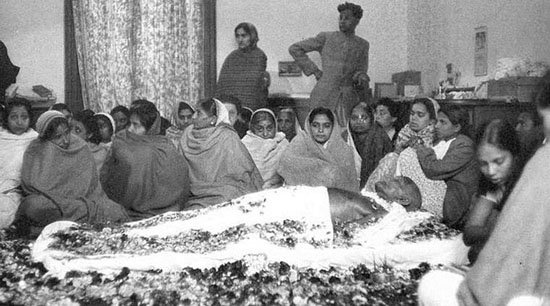 Rais Amrohvi (Syed Muhammad Mehedi), was a famous poet of Urdu language and happens to be the elder brother of another very popular Urdu poet Jaun Elia. Amrohvi denotes his native town Amroha, which was then part of Moradabad district in Uttar Pradesh. When, in 1947 riots broke out in North India, just after the partition, he chose to move to Pakistan. Later, in 1988, he was assassinated by militant extremists for being a Shia.

Even though he moved to Pakistan and regarded Mohammad Ali Jinnah in high regards his respect towards Mohandas Karamchand Gandhi (Mahatma Gandhi) was no less.

In an interview, given in 1984, he recalled how deeply he was influenced by Mahatma Gandhi and his personality. When Hindu-Muslim riots broke out in Delhi in August-September, 1947, Amrohvi was in Delhi. According to him Muslims requested Mahatma Gandhi to come to Delhi from Calcutta. Gandhi was in Calcutta to control the riots. Amrohvi tells that it took Gandhi more than a week to reach Delhi but as soon as he reached Muslims in Delhi felt relieved. Arrival of Gandhi, according to Amrohvi, gave an amazing strength to the community which had been pushed to the wall. He further adds that though he left India soon, but respect for Gandhi remained in his heart.

Amrohvi tells us that on 30 January, 1948 when Nathuram Godse killed Gandhi only for the reason that he tried to save the minorities in India it broke his heart. The first question, which struck his mind was, “After Gandhi What?”

On 30 January, 1948, Amrohvi was devastated and he wrote down many Qata (Quatrains) eulogizing Gandhi, which were never published since he was living in Pakistan.

I present a few of those Qata here:

(English were amazed at every call made by Gandhiji

He never ran from the battlefield, no matter how many were the enemies

Only a righteous person can be expected of which

He welcomed the death with such a glory)

(Oh! Gandhi has been martyred by a Hindu

This death is known as glory of life

India’s liberation is a miracle of a short heighted man

Gandhi was an incarnation of Gautam and Gita)

(Not only India, he was the pride of Asia

Wearing a loincloth he was glorious than the kings

He was the personification of fidelity, conviction, sacrifice and courage

Though a Hindu but he was better than lakhs of Muslims)

(Don’t look at how he lived

Consider what has he become after death

Have transformed into a magical chemical formula)