Summers of 1857 struck the British in India like a nightmare. Indian sepoys of British Indian Army joined by landlords, peasants, and other sections of the society rose up in revolt against the foreign rule.

The fire which broke out on 10 May, 1857, at the Meerut cantonment soon engulfed Delhi, Ambala, Muzaffarnagar, Panipat, Faizabad, Lucknow, etc, and by June, Bihar also started feeling the heat of this popular uprising.

Tayler recalled that in view of the news being received, from Delhi and Awadh (Lucknow), and intelligence inputs, by June, an uprising in Bihar seemed imperative. After much deliberation and discussions with his officers he decided to act first before it was ‘too late’.

In Tayler’s view there were three sections of the society which had to be checked in order to avoid a popular uprising in Patna and other five districts under his charge. These three categories were:

Among these, wahabis were considered to be the most ‘dangerous’.

On 20 June, 1857, Tayler, under a plan, invited a few distinguished persons from Patna for dinner at his residence on the pretext of discussing the law and order situation. After the meeting was over, three of the wahabi leaders – Shah Mohammad Hossain, Moulvi Ahmadullah, and Moulvi Waiz-ul-Haq – were arrested by him as a ‘preventive’ measure. All these three leaders were kept at the circuit house under the vigil of Captain Rattray. Soon, arrests were followed by three more wahabis, two at Patna and one at Dinapore.

If we believe Tayler, his ‘preventive’ measure followed by the disarmament of Muslim houses in Patna broke the back of ‘Indians’ and no major uprising took place.

Still, on 3 July, 1857, a group of armed men under the leadership of Peer Ali attacked the English settlement in Patna. One English man got killed during the raid.

Inferior armoury, imprisonment of prominent leadership, and disarmament of the city resulted in debacle of Indians. A number of Indians were arrested. Of them, twenty one, including  Peer Ali, were hanged publicly on 7 July, 1857.

Peer Ali, before his hanging, was brought to Tayler. Tayler recalled him as a man whose ‘unconquerable fanaticism rendered him a dangerous enemy, and whose stern resolution entitled him, in some measure, to admiration and respect.’

On being asked, by Tayler, whether Peer could do anything to make it worth while to spare his life, Peer answered with supreme coolness and some contempt, “There are some cases in which it is good to save life, others in which it is better to lose it.”

Peer concluded his speech by saying, ‘‘You may hang me, or such as me, every day, but thousands will rise in my place, and your object will never be gained.”

In words of Tayler, “Peer Ali met his death, as most Muslims do, with calmness and fortitude.” 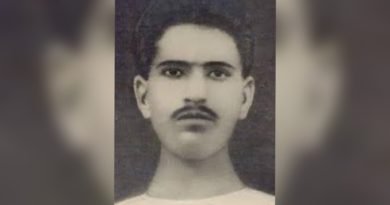