Sportspersons from India with their sheer determination and hard work have made the country proud at various international events across the globe. Be it hockey, cricket, boxing or wrestling etc. every single athlete has contributed a lot to Indian sports. While many of them have won medals and trophies, a number of sports persons have contributed to the Indian sports immensely without ever winning any international event. Yet their performances and impact have paved the way for the generations to come.

Such was the legacy of India’s swimmer Shamsher Khan. He was the first Indian to represent the nation in swimming at the 1956 Summer Olympics.  Not only did he represent the nation at the Olympics and also got an opportunity to serve in the Indian Army. Shamsher while serving for the Indian Army participated in the Indo-China war in 1962 and the war with Pakistan in 1971.

Legendary swimmer Shamsher khan was born in 1933 in Kaithepalli, Guntur, Andhra Pradesh. When he was 16 years old, Shamsher joined Indian Army. He was inducted into Bangalore’s Madras Engineer Group. As he already knew swimming from his childhood days by swimming in Krishna river, in 1949, with his days in the army, he decided to take up swimming professionally.

In 1949, he made quite a splash when he competed in his first swimming tournament at Mysore. From there, there was no looking back for him. This was the beginning of veteran’s illustrious career. Shamsher made a national record in the 200-meter butterfly in 1954 and broke all records at the national meet in Bangalore in 1955.

The call of the Olympics and the subsequent struggle

Because of his record breaking achievements at national level, the phenomenon Shamsher Khan earned a ticket to the qualifying rounds of the Melbourne Summer Olympics of 1956. His appearance at the Olympics made him the first Indian swimmer to represent the nation in swimming at the Olympics. With his concerted efforts he was able to secure the 5th position in the qualifiers and participated in both breaststroke and butterfly. It was a remarkable achievement, one that is yet to be repeated by another Indian swimmer. In his quest to achieve Olympic glory, the Indian Army sanctioned a loan of Rs.300 to meet his food and other costs during the Olympics.

After returning to India, khan wanted to concentrate on hard training with better trainers and facilities but it was his poverty which shattered his dreams. Life had other plans for him. Being enlisted in the Indian Army he served the country and participated in the Indo-China war in 1961 and then in 1971 war with Pakistan.

Retirement and falling into obscurity

He served the army for 24 years and retired from the rank of “Subedar” at the age of 43 in 1973. After retirement he settled in Kaithepalli with his wife and five children. Due to being financially fragile and not getting any kind of assistance from the government, Shamsher’s family suffered from financial crisis and their livelihood depended on farming.

Things worsened in 1990 and despite his monetary situation he did not get any kind of government support when his house got washed away in the 1990 Andhra Pradesh cyclone. Then came the shock that broke his heart when he found out that his name was omitted from the Swimming Federation of India’s list of ‘Hall of Famers’. With advancing age Shamsher developed heart problems. Shamsher suffered a stroke in 2010 but refused to seek medical assistance in order to save money for his family. On October 15,2015 Shamsher Khan took his last breath after suffering a cardiac arrest at his native village of Kythapalli in Guntur district of Andhra Pradesh.

The Olympic veteran never fought for the recognition he deserved. As the time passed, Shamsher Khan turned into a forgotten name in the sports fraternity. Though the sporting ecosystem in India is changing from past few decades, it has shown significant improvement in infrastructure and also the introduction of competitive leagues in various sports. India’s sporting growth continues to improve. Even after all this Khan’s record still remains intact. Shamsher Khan was a true Indian hero, whose achievements have left a mark for athletes to take inspiration from his legacy. 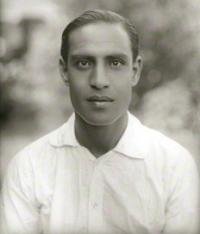