After the massacre of Indians at Jallianwala Bagh at Amritsar & humiliation of Caliphate in Turkey Mahatma Gandhi along with stalwarts like Mohammad Ali, Shaukat Ali, Madan Mohan Malviya, Swami Shraddhanand, Swami Satyadev, Motilal Nehru etc. traveled through India urging the people to stop cooperating with the British Government. On 10th October, 1920 Gandhi addressed a public meeting at Moradabad along with other political leaders, which included Bi Amma.

An appeal was made to the Muslim University of Aligarh and the Hindu University of Benares to refuse Government grants and tear to pieces the ‘Charters’ granted them by the Government; and, in case of the failure of these Universities, it recommended all those concerned to see that the students of both the Universities vacated them. The selection of speakers in favour of the resolution was also very happy. For Aligarh stood up Shaukat Ali, the man who has loved the University like his own mother and who has always- felt proud at its continued progress. For the Benares University was chosen Bubu Shivaprasad Gupta, a bosom friend of Panditji (Malaviyaji the founder), and one who knew all the ins and outs- of the University.

Maulana Shaukat Ali said, “Upon Aligarh falls the good fortune of having to pass through the ordeal of doing non-cooperation in education by returning the dirty grant of a lakh of rupees from the Government. If I can persuade the twelve hundred Aligarh boys to vacate the University and send them out to serve the cause of the Khilafat, what better education can. I impart to them than that ?”

The Moradabad Conference thus played its part well and truly.

The Aligarh visit was fixed at the pressing invitation of Maulana Shaukat Ali. Shaukat Ali used to say to all and sundry, “we’ll first empty the Aligarh College. That will produce a tremendous effect on the whole of India and only then can Muslims claim an achievement as great as that of Gujarat.” In the noon of 12th October, Gandhiji, Maulana Shaukat Ali and Mohammad Ali met the students of the College in the building of their “Union” situated within the precincts of the College itself.

There had already been a stir among the students for the past many days. Many of them got up and put questions to Gandhiji. A past student of Aligarh, and now a barrister, offered many arguments. “Your work is destructive, not constructive. What are the students going to do so long as you are not able to start a new college ? First give a grant equal to that of the Government and only then can the college be nationalised. The education imparted at present may not be of the highest quality, but it is certainly not one which deserves to be thrown away.” He went on in this strain for long. Gandhiji admitted, “This is definitely a work of destruction. But the one thing necessary first of all is to totally eradicate the weeds that have grown, so that corn-seeds could be sown in their place.” As regards the merits and defects of the present education, Gandhiji merely stated, “How can you adhere to that institution where you have to pay allegiance to the Union Jack, be it for a moment, and where you have to state, to an august visitor like the Governor or some high officer, that you are loyal to the Empire though in fact you are not ?” To rebut the argument about money-difficulty, Gandhiji said, “Contributions will pour all the more into that college which has become independent. And how can there be any fear of want of funds, when stalwarts like MohammadAli and Shaukat Ali are there to stand by you ?”

In a speech well received by the students Gandhi said:

“…the heart of the Muslim brethren have, therefore, been pained. The next thing is that the actions of the Government in the Punjab after passing of the Rowlatt Act have convinced both Hindus and Muslims that it is impossible to get justice from this government… They made us – Hindus and Muslims to quarrel among ourselves. They used to speak very ill of Hindus before Muslims and Mulims before Hindus… If Islam is in danger today, Hinduism is also in danger, for if it is Islam’s turn today, it will be ours tomorrow… Both (Hindus and Muslims) have decided that by fighting with the sword they would lose their money, their precious lives and they would be unsaved still more, as they do not possess guns and ammunitions in such quantities. We have received no such training from the government… We are taught the lessons of slavery in the Aligarh College. We should boycott this slavish education. This is my first lesson… . When thirty crore of men combine and organise with a view not to have this Government in their midst, it have this Government in their midst, it would be impossible for the government to remain in India… . we should boycott Government Educational Institutions. It is the same for us that we have not as yet left them as the Non-Cooperation Movement has been in existence for a few months. We should give up practicing as their lawyers. We will become mendicants. We will beg. We will subsist on rice and pulses. We will accept bare bread but will take our liberty also with. It is then alone we can be counted among the human beings. No one who is not free can engage himself in devotion of God…. We do not want their titles. We regard their titles as badges of slavery and want to return them. We do not want to send a single soldier a labourer in their (army). It is our right and no one can use force towards us in this respect …. We are not going to enter their legislative councils…. Non-Cooperation is nothing more than sacrifice…. India has to pay seven crore of rupees for cloth and therefore Swadeshi Movement has also been included in this…,Non-Cooperation with one means Cooperation with others. Unless we have mutual regard for each other we can not become united or Organised”.

Maulana Shaukat Ali said, “That you are prepared to leave your dearest alma mater for the cause of the Khilafat is itself an education of no ordinary kind. That college can never be called a muslim college whose trustees flatter and serve the enemies of Islam.”

Maulana Mohammad Ali asked the questioner (the barrister), “What do you love more— your college or Islam ? Is the enmity between Islam and British rule an established fact or not ? Is there or is there not Britania’s hold on Jazirat-ul-Arab ? If you answer these questions in the affirmative, any help you get from the British is then haram for you. You say that the College was built with your money, the buildings are yours, in fact, everything there is yours. I ask you, “Why did you then build what is called “Stretchy Hall ?” Why did you found “Lytton Library ?” and thus made Stretchy and Lytton immortal ? It was as an expression of revolt against the present education, that Sir Syed Ahmad laid the foundation of the Aligarh College. The College has now slipped away from its fundamentals. It is now for you to restore it to its original stand.”

The Aligarh students seemed to be highly impressed. They met the professors as well as some trustees. The next day some trustees gave notice to other trustees to the effect that the Government grant must be given up. At the same time the students gave another notice that they would leave the College in 15 days, if the trustees did not relinquish the grant within the period. The notice period expired on the 29th October. The whole Muslim world was eagerly awaiting the outcome on that day.

Now we all are aware of what happened at the end of this notice period. On 29th October, 1920 at the Jama Masjid of the Aligarh Muslim University Maulana Mehmudul Hasan laid the foundation of a new University known as ‘Jamia Millia Islamia’. Jamia Millia Islamia later shifted its campus to Delhi, and is a well known University. 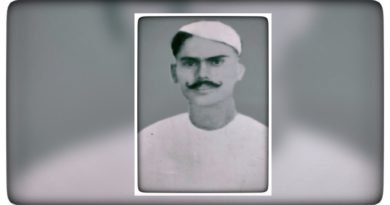