Kazi Nazrul Islam, who used his pen as a weapon in the fight against foreign rulers, was born on 25 May, 1899 in Churilia village, Burdwan district in West Bengal. His father was Khazi Fakir Saheb and mother Zaheda Khatoon. He lost his father in his childhood. Thus he had to work in several places to feed his family. He worked with a theater group and wrote lyrics and plays for it.

He joined military in 1917 to get training in the use of arms, with the object that it would be useful for him to send the foreign rulers away. But when he returned to his native place in 1919, he settled down in literary work. He took membership in the Indian National Congress and participated actively in the programmes during the National Movement. He never hesitated to criticise the wrongs, which his conscience did not accept.

He created revolutionary literature inspiring the youth to join in the National Movement to overthrow the British rulers. As a result, he was branded as a ‘Rebel Poet’. He made sharp criticism in his writings against the misrule of the British. The British government, irked by his writings, sent him to jail. Even in jail, he revolted against the authorities. He launched hunger strike and continued it for 40 days in the prison demanding the improve-ment in the conditions of the inmates.

After his release from the prison, Islam started ‘Shramika Praja Swarajya Dal’ in 1925 to achieve total self rule. He launched a magazine ‘Langal’ to promote the ideology of the Dal. Meanwhile, he met the communist leader Muzaffar Ahmed and was influenced by the developments of the Russian Revolution. This caused ire among the British rulers. They sent him to jail several times and imposed ban on his magazines and his poetry. But, Nazrul Islam never stopped writing. Despite illness and poverty, he continued writings criticizing the British rulers, landlords and imperialists.

He was not only an orator, but also a gifted singer. Islam fell ill in 1942 and lost his voice completely. He spent about three decades in mere silence. After Independence, Nazrul Islam was honoured by the Governments of India and Bangladesh with several awards and honorary doctorates. Khazi Nazrul Islam was honoured by the Government of India with the ‘Padmabhushan’ in 1960. He breathed his last on 29 August, 1976 in Dhaka. 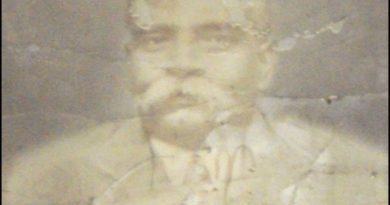 A Burqa Clad Woman Commander of Indians in 1857