Dr. Fakhruddin Ali Ahmed, who was prepared to face the warth of the British trading community to defend the rights of labourers, was born in Delhi on 13 May, 1905.

His father was Colonel Jalnoor Ali, who opposed the discrimination shown by the British officials against the Indian officials in the Army.

Ali Ahmed was graduated from Punjab University and studied law in England where he met Jawaharlal Nehru.

He started his practice in 1923 as an advocate at Lahore and took membership in the Indian National Congress in 1931 to enter into the National Movement. He went to Gowhati, the present Capital of Assam, to look after his family estate.

In Gowhathi he took up the key responsibilities of Assam branch of the Indian National Congress. He rejected the invitations by the Muslim League leaders and continued in the Congress only.

He defeated the Muslim League candidate in 1935 elections and got elected to the Assam Assembly and became Minister for Revenue and Labour Welfare. During his tenure, he brought several pro-labour bills like Agricultural Income Tax Bill etc., defying the ire of the British traders.

He participated in the individual Satyagraha in 1940, for which he was jailed by the British. Later, he was once again imprisoned for his role in the Quit India Movement and was in Jail till April, 1945.

Dr Fhakruddin Ali Ahamed got married to Begum Abeda in 1945. He declared that the unity among the Hindus and Muslims is essential to achieve independence and strongly opposed the divisive politics of the Muslim League.

He got elected to the Assam Assembly and Rajyasabha several times after independence and held different ministries in Govt. of India. He joined the Central Cabinet on the invitation of the Pandit  Nehru.

When Indian National Congress was split in 1969, he supported Indira Gandhi. He was elected to the Parliament in 1971.

In the later political developments, Dr Ali was elected as the President of India in 1974.

As the fifth President of India, he helped the development of Sports and Cultural activities, since he was personally interested in those fields.

Fakhruddin Ali Ahmed was born on 13 May, 1905. He was the second #Muslim President of India. In 1977, he died in office while going for #namaz. Ahmed declared emergency in 1975 on cabinet's suggestion. @iamrana @rashtrapatibhvn @shahid_siddiqui @RifatJawaid @CMOfficeAssam pic.twitter.com/mVMSSuqIxk

Though he was criticized for the declaration of  Emergency in 1975, he was respected for his honesty, integrity and secular ideology. Dr. Fakhruddin Ali Ahamed took his last breath on 11 February, 1977 at Rashtrapati Bhavan, New Delhi. 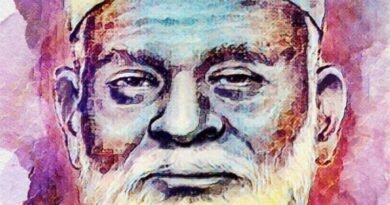