Caste system among Muslims in India is often debated among academic circles and hushed elsewhere. Many believe, especially the upper caste, that it is a new invention of modern politicians while others believe that high-brow academia has exaggerated the issue far too much.

Whenever trying to present opinion on the issue I come across two diametrically opposite reactions; either people accuse me of being an upper caste Muslim trying to silence lower caste voice, God knows why they think so, or I am accused of presenting unreal views of academia because of my training at Jawaharlal Nehru University (JNU).

The purpose of this article is to tell the world, for once and all, that my introduction to the caste system among Muslims is not because of JNU. The silencing, exclusion and discrimination practised against the lower caste for centuries were not taught to me by any scholar of modern English education system. Mohammad Hashim, my abbaji (paternal grandfather), an Islamic scholar, was the person who introduced me to this dark reality where my whole existence is reduced to my caste identity.

In terms of caste identity, I belong to Gara (گاڑہ ، गाड़ा) community, a localised caste found only in Muzaffarnagar, Saharanpur and Haridwar districts of Uttar Pradesh & Uttarakhand. Traditionally, people were agriculturists who owned lands and somewhere at par with Jats of the area. Though economically well off during the early 20th century Garas were mostly uneducated, barring few.

Abbaji (grandfather), born in 1918, lived in Dadheru, a village in Muzaffarnagar. Those were the times when social and educational awakening in India was happening and his family did not remain untouched. Under one Hafiz Ameeruddin abbaji started taking lessons in Islamic teachings. Teachers considered him a bright student as abbaji memorised the Quran in his early teens.

Among Muslims, it is a practice still followed that the young scholars after memorizing the Quran lead Taraweeh prayers during Ramadan (Ramazan). Taraweeh is a long Namaz (Islamic way of prayers), where traditionally each day one chapter of the Quran is recited during Ramazan. Thus, 30 chapters of the Quran are completed in the holy month of Ramazan.

In 1933, during the Ramazan his teacher decided that abbaji should lead the Taraavih prayers. Being a bright student he wanted him to recite the Quran in front of the best Islamic scholars, so that abbaji could also learn something with constructive criticism. No doubt, he learnt one of the most important lessons of his life but in a different fashion.

In those times Manglaur, a town near Deoband and Roorkee, was famous for its Islamic scholars. The town has produced many Islamic scholars during the 19th and 20th century. With the help of another Hafiz Senna, his teacher ensured that abbaji would lead the Taraweeh prayers in Manglaur in 1933.

On the first of Ramazan a young Hashim (abbaji) was called upon by Qazi Abdul Ghani, a senior person of the town and of course an upper caste, to lead the prayers. Mr. Ghani asked the people present in the mosque to tell the young boy about how much of the Quran they want a young Hashim to recite. It was a common practice to ask people. This is where someone sarcastically remarked, “Gare ka ladka hai, kitna hi padh lega. Padhne dijiye.” (He is a Gara boy. How much can he recite? Let him recite.) This was a casteist slur made by an upper caste man, agreed upon by others present. A young Hashim was being introduced to the harsh reality of the caste system. ‘Egalitarian’ space like mosque is being used to play out the caste discrimination. If not for his mentors, which included an upper caste gentleman as well, abbaji would have succumbed.

Mr. Ghani took him to a corner and told him, “Jitni himmat hai utna pehli do rakat me padh dena.” (Recite as much of the Quran in the first two Rakats of the Taraweeh as you can.) An obedient student, Hashim, started reciting with a conviction of proving the casteist slurs wrong. Young abbaji recited 20 chapters, out of 30, of the Quran during the first two Rakats and completed the whole Quran during the night, the first Taraweeh of his life. When Taraweeh completed all but four of the people remained in the mosque.

The feat of reciting a whole Quran in one Taraweeh is called Shabeena and is considered an achievement. He became famous as someone who could recite Shabeena at will. Abbaji could shut the mouths of his casteist critics on the very first Taraweeh but the episode made him realize of the harsh reality that the mosques are not immune to the caste discrimination.

Seventy years down the line, it was Ramazan of 2002. We were trying to sleep at our home when someone knocked on our door. It was a huge crowd, mostly of upper caste people of a nearby locality, fighting among themselves over an issue of recitation during Taraweeh. One group, mostly elders, believed that the man reciting was wrong in his recitation scheme while the other, mostly youngsters, were backing the man. So they decided to wake up abbaji and take his opinion.

Abbaji decided in favour of the man leading the Taraweeh, a decision accepted unanimously. From being rejected as a lower caste boy who should not be taken seriously to being respected as a scholar by the upper caste his journey was not easy.

This is from where I have learnt my first lessons of caste based discriminations and ideas of social justice. 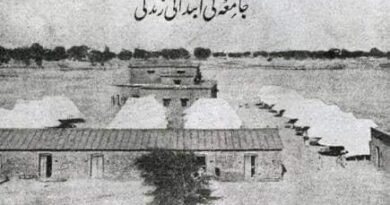 Tales of two Historical Mosques and one Mission: education. 2 thoughts on “Caste Discrimination in Mosques & My Grandfather, Mohammad Hashim”